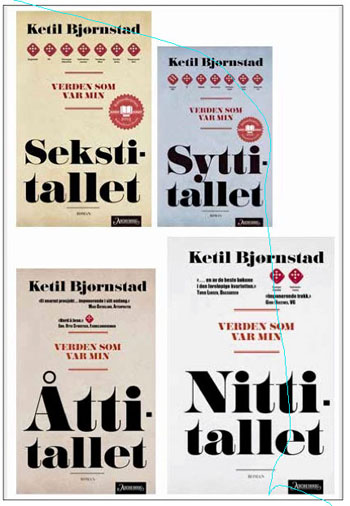 Vivid description that gives the reader both new
experiences and - for many - stir up memories.
Thereby, this work of literature has qualities that
makes us realize that this is for more than just
the author's world. Tønsberg Blad, six out of six
stars

Lives up to and exceeds the expectations.
Adresseavisen

Bjørnstad's gigantic work about the world, with
his own life as a starting point, proves itself ever
stronger. Dagbladet

From the sixties and onwards, Ketil Bjørnstad is
writing his own life story juxtaposed to the histories
and history of the various decades of his life. The
first three books have been a tremendous success
amongst Norwegian critics and audience alike, be-
ing nominated to the Norwegian Bookseller's Prize
and dominating the bestseller lists for months in a
row.

Book four: The Nineties, out in September 2018,
marks a major change in the author's life. He moves
back to Oslo, meets C. and tries to put all the lies
behind him. The two travel from Oslo to Bangladesh
to Paris, during the decade of irony and cruelty
when truths are put on trial, both at a personal level
and on the world stage. The USSR dissolves and the
Balkan war breaks out. Lady Di is killed. President
Clinton is brought to court by the Lewinsky-affair
and Bjørnstad's publisher William Nygaard is shot.
And later, as Y2K is approaching, the doomsday
mood increases in the entire western world.

The Nineties is an impressive memoir... one of the
best books in the ongoing quartet (..) offers tem-
perature and commitment, love, grief and anger.

Ketil Bjørnstad is one of Norways most prominent musicians, composers and writers.
Versatile and prolic, he has published more than 30 books – poetry, novels and factu-
al accounts of the lives of the painters Oda Krohg and Edvard Munch, the author Hans
Jæger, the musician Ole Bull and the film artist Liv Ullmann.

His books have been published in several languages.